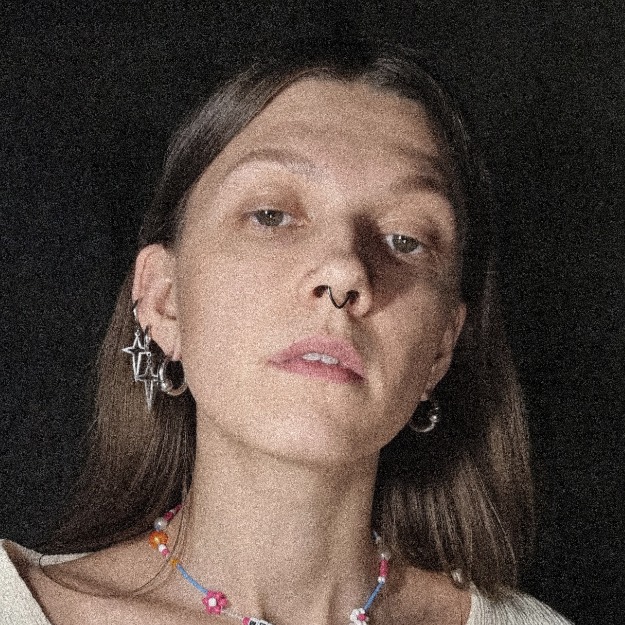 Gloomy Glow (Anita Khrustaleva) is an artist who explores the potential of art to be a safe existential "awakening experience" capable of guiding the viewer to reassess life, to form a personal value system, humanism, and profound empathy. It combines the motifs of human's impending imminent death with a variety of emotions and moments from people's lives, from love and peace to loss and unbearable grief, and offers a view of life as a singularly sensual exploration of what it is to be a living being.

She was born in 1990 in the city of Ufa, Republic of Bashkortostan, where she has lived most of her life. The multinationality of the population and the cohabitation of different religions shaped her tolerant personality. She studied at a regular school, but as a "well-off child", thanks to her father's alimony, she found herself stuck between different social strata, constantly being bullied for being introverted and for her financial security by her classmates and teachers. She also felt like an outsider among the "golden youth" and became an outsider to all the ideas, attitudes, and societies that surrounded her, constantly watching everyone around her and herself from the sidelines. Her mother suffered from depression and always wanted to die, refusing treatment. Her inability to help her mother led the artist to explore questions about what breaks people so irrevocably and what ways to help younger generations. And her two degrees, "Designer" and "Architect," only strengthened her skill to look for solutions to society's problems and needs through creativity.

In her youth, she was influenced by Sartre's "The Wall", the works of H. R. Giger, the Holocaust, astronomy, and atheism. And the turning point in the formation of her style was García Márquez's "One Hundred Years of Solitude", which opened for the artist the direction of magical realism, which led her to the idea that even a scientific and atheistic view of the world can be transformed into magical images. At the moment she integrates the ideas of cognitive-behavioral and existential psychotherapy into her drawings, working either with charcoal pencils on paper or in digital collage technique with elements of computer graphics. She lives and works in Voskresensk.

The environment in which we grow up and mature enormously affects the way we later perceive ourselves and the world, generating both its pluses and minuses. This is increasingly evidenced by various studies. So too, capitalism, which has created a new environment, has brought us all the benefits of a rapidly developing world, delightful discoveries, and technology, but has definitively taken away the value of our senses and lives. This imbalance has led us to a surge of depression, mental illness, stress-induced illness, and tremendous strain on the brain.

Our body is a very complex organism, where everything is built on a very delicate balancing act. And by devaluing our emotional life, we are destroying our bodies and ourselves with our own hands.

I've watched this process all my life. How it has destroyed me and the people around me. A tremendous amount of grief, fear, devaluation, self-destruction, fatigue, and meaninglessness. It has always been painful for me to see it.

And, paradoxically, accepting the possible meaninglessness of the universe and the inevitability of death prompted me to start working with individual meanings and values. It changed my life from a permanently depressed person to a person who enjoys the opportunity to explore life and experience the diversity of feelings and experiences. This, for me, is the miracle of the human mind - the ability to change the rules of the game by reprogramming myself. And now I am convinced that this approach can help many people feel better about themselves.

The central theme of my work has been the whole spectrum of human experience and reflection on it as a way of getting to know yourself and finding your own meanings, your own system of values and aspirations that can fill your life with depth, passion, interest, and pleasure.

By combining and mixing my interest in science, the universe, psychology, and human life with my own life experiences, I have created a fictional world of cosmic ghosts to tell through it how valuable our experiences and time are and that they are all we essentially really have. A world where the experience of every human being who has ever existed is preserved in the fabric of the universe in the form of particles that we have not yet been able to detect, even with the most advanced technology. And gathering together, these particles flash into the void among the blazing stars as ghosts, as people, as minds, to re-experience for a moment the various experiences that once filled their lives.

Diploma of I degree

Diploma of the Union of Architects of Tatarstan

Diploma of the Union of Russian Artists

This artist is presented by
Gloomy Glow

(0) artworks of the artist in total

Filter
Select art media
Sorting and searching
Sort by
Sorry, we couldn't find any matches for that
Share
How to scan a QR Code